It is hard not to gush about the delightful warm dry weather we have been experiencing. There are a few drawbacks for the garden; a few plants that are usually blooming through early June are mostly gone (late daffodils e.g. Pippit) and I'm watering quite a bit just to keep planted out vegetable starts and seed beds viable.  Must admit that it was enjoyable watering this morning, nice to feel the spray of the hose on my bare legs and smell the newly wet soil.
There are a number of shrubs blooming right now, but today's focus will be on the Rosy Lights Azalea and Cunningham's White Rhododendron, both seem to be about peak right now.  Rosy Lights is a deciduous Northern Lights hydrid (Rhododendron x kosteranum and Rhododendron prinophyllum) according to the Minnesota Cooperative extension article.  The one I have has lived happily in a large black plastic bait tub (long-lining) for the last 15 years next to the path to the vegetable beds. Occasionally I have the urge to plant it out, but it seems pretty content in the tub and is free from being overrun by more aggressive plants, so it will likely stay put. I fertilize it twice yearly with commercial rhody food using the minimum amount called for on the box. It is covered with wonderful hot pink flowers early spring, and this year they are exceptionally fragrant, (clove pink like). Maybe the dry warm temps?  It is definitely a shrub I'd recommend. 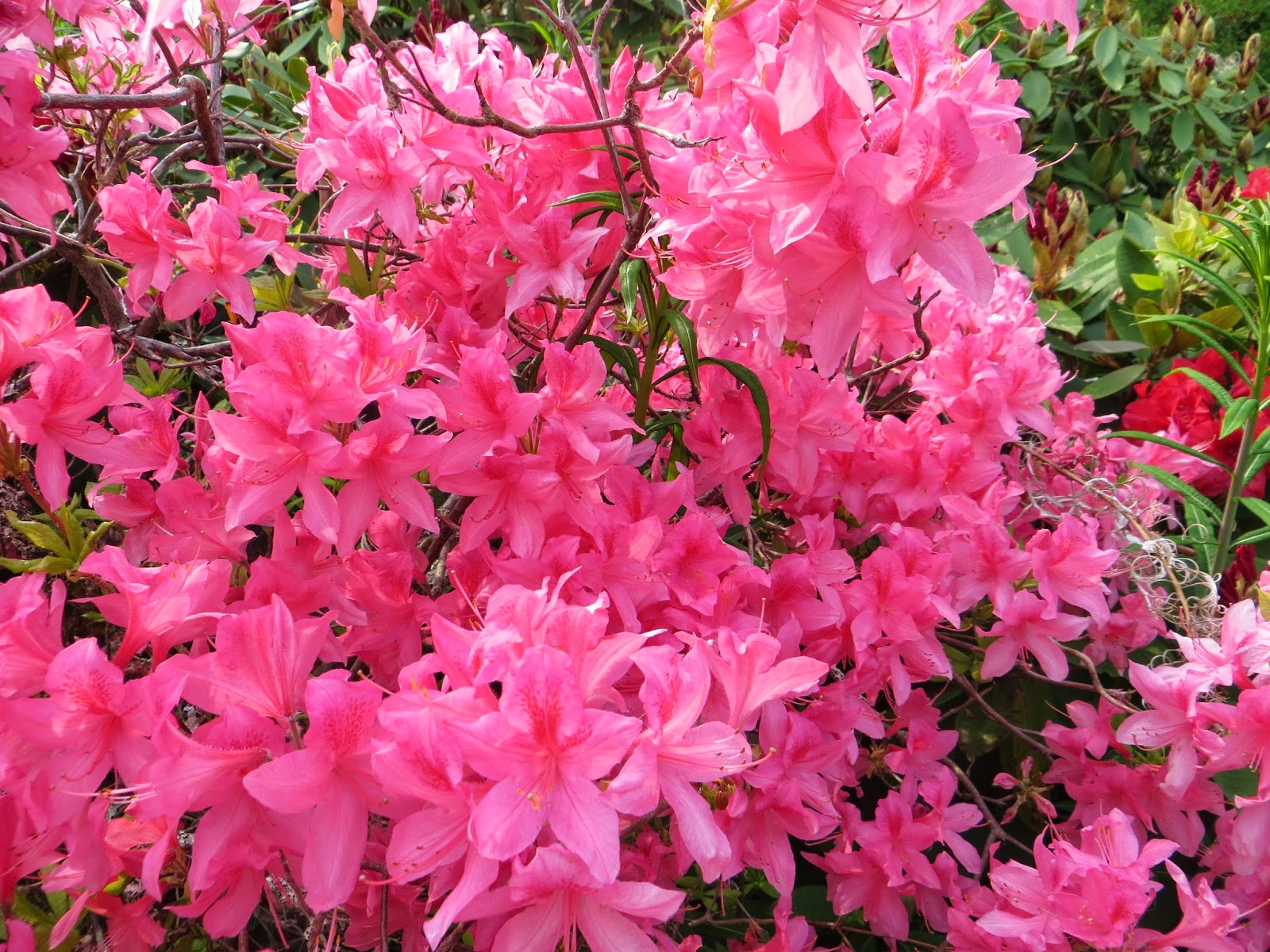 Cunningham's white is much less gaudy; lovely white flowers with a bit of yellow sprinkled on the upper petal. This rhododendron lives on the east side of the house on the far side of a rather huge Blue Peter Rhododendron.  One site gives an ultimate height of 3-5 ft, but this rhody is already about 6ft tall, perhaps taller than normal because of the partial shade from the rhody forest.  I've had this plant for maybe 15 years as well and it also gets twice yearly feeding. There is a wonderful place to sit under the canopy of the two rhododendrons, the space is open enough (I've trimmed out some salmonberries) that is is relatively well lit and delightfully cool on a warm day.  Today I got to watch (from relatively close by) a Song sparrow do some extensive preening,
This photo of the flowers was taken from this spot (standing not sitting though). 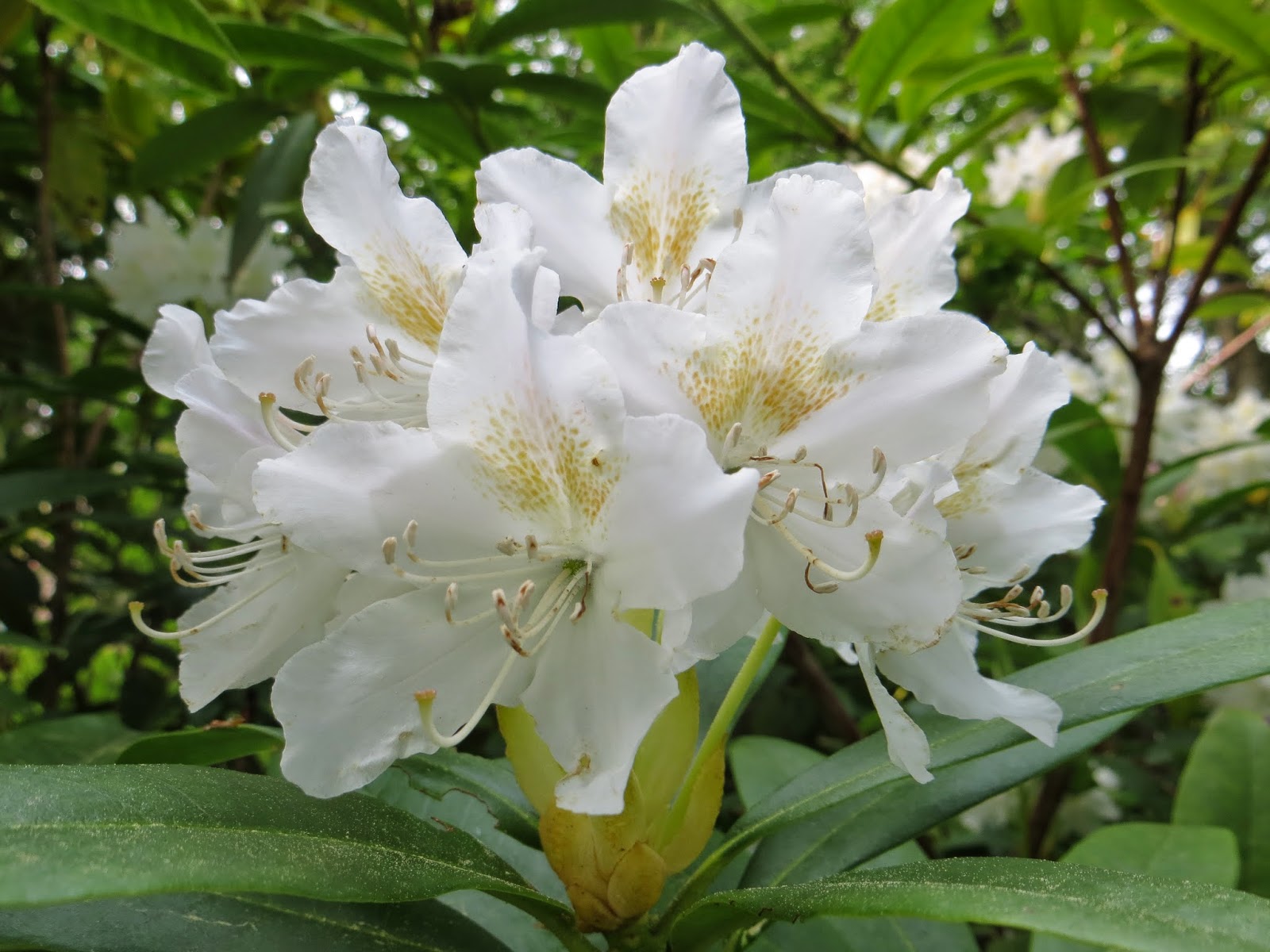 Time to pick up the threads of this blog again.
A good way to restart is to perhaps start cataloging what is living in my garden, before I completely lose track. 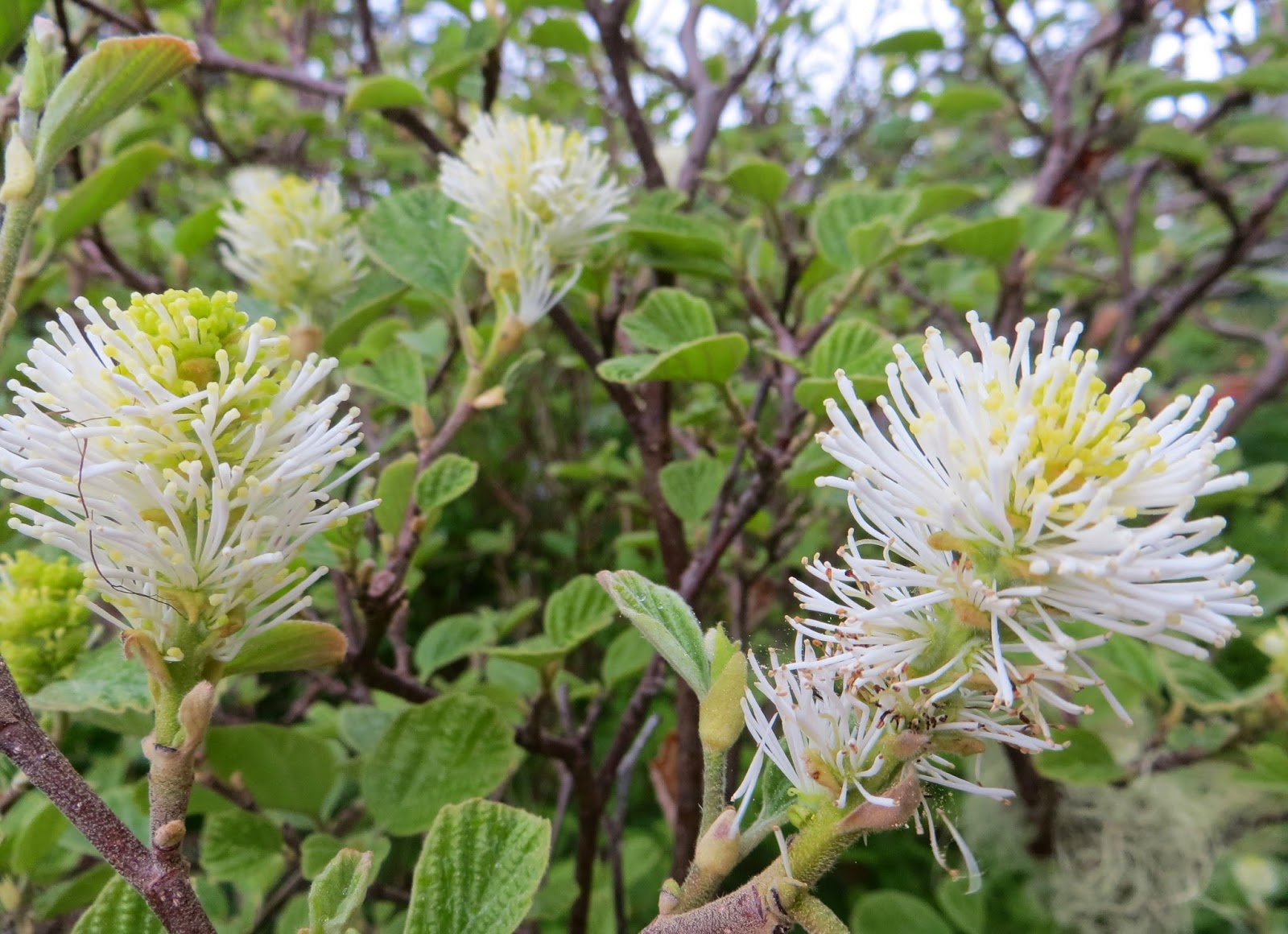 One shrub that is blooming now is Fothergilla major a member of the Hamamelidaceae or Witch Hazel family. There are two species native to the United States; major and gardenii.  Mountain witch alder is one of the common names for both species of Fothergilla. The genus was named for Dr. John Fothergill, a Quaker natural history enthusiast who subsidized various botanical and scientific endeavors including William Bartram's collecting expedition to the southeastern United States in the 1770s.
I seem to have lost the original tag for the plant in my garden, but based on the phenology and morphology, I'm fairly certain that I have F. major which produces flowers and leaves simultaneously; F. gardenii produces flowers before it leafs out.  F. major is also more abundantly branched and taller than is F. gardenii, which also fits my plant.  The latter has been in cultivation in England since the mid 1700's,
Currently the plant in my garden is about 5ft tall and 3ft wide.  It is a pretty slow growing, hardy and unassuming. The flowers are white bottlebrush that are supposed to have a fragrance like honey. I haven't noticed any strong scent, perhaps it is more noticeable in warmer weather.  The dominant white color comes from the stamens (filaments) petals are lacking, sepals small. Some years, the leaves turn a nice golden color. I haven't given this plant much care other than occasional light fertilizer and keeping the invading Sitka rose, Salmonberry and Spiraea from taking over its territory. Fortunately, it seems to enjoy the well drained, acidic soil and exposed site in which it lives. 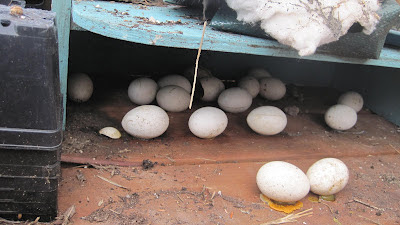 I spent most of the day in the garden, it wasn't as sunny, but it wasn't raining either, so out I went. I was motivated by needing to dig up a few Willamette hops starts for a neighbor. As I started into that project, it came to me that it was time to renew/replant the bed with the hops. Like I've mentioned before, the bed was a mess, from a combination of half measures, construction and time. Perennial beds do need a bit of care. I managed to get about half of it dug, the second half is either about to bloom or is just coming up and perhaps delicate. The monkshood, English hyacinths, and primroses are in buckets and pots until replanting. The Erythronium (wild and domestic) are still in the bed as is the deep blue pulmonaria and Epimedium.
One thing I'd really like to share is the following "DO NOT UNDER ANY CIRCUMSTANCES PLANT AEGOPODIUM (BISHOPS WEED) IN YOUR GARDEN. Okay, maybe just not if you don't want it to take over the planet. I'm sure it has it uses in places as a ground cover, but it is a very successful plant, so beware.

Also managed to get the compost completely turned. It looks wonderful, full of worms and is odor free. In the bottom of the pile I found about 20 newts, many centipedes and a two snails. I added 4 buckets to the raspberries, 1 to the rhubarb and 1/2 to the peony. The rest, I'll let cook a bit more then add to the gardens.
Started clearing out the greenhouse as well; the first task was removing (with care) the 18 very rotten chicken eggs found under the shelf. Managed to get by with only two broken ones (stuck to the floor and broke when I pulled them up). Green slime! Well, got things cleared enough to put some of the seed starts out there. Was tempted to put everything, but the basil and tomatoes probably won't be happy out there yet.
Posted by Kitty at 10:20 PM No comments: 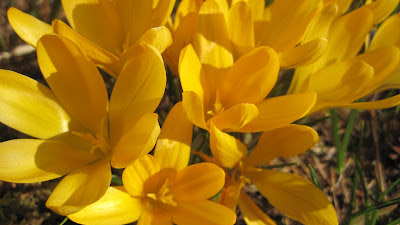 At last, I'm getting to spend a bit of time in the garden. "Getting" is a bit strong; choosing is more appropriate. The weather has moderated; summer birds are arriving and the garden soil seems to be warming up. There is much to do; new cedar boards for the vegetable beds, redoing the garden that was in the construction zone last summer and continuing to move the trees and shrubs from the various nursery sites (typically vegetable beds) into more suitable and perhaps permanent homes. Probably don't need birch or white spruce in the vegie beds.
Also on the list is expanding the garden to the northwest of the woodshed. Had a trio of very useful sawyers out this winter making firewood out of downed trees and a few medium sized second growth so that there might be room for expansion.
Although the to do list is very long; have started some seeds; tomatoes (bloody butcher and red pear), american flag leeks, broccoli, romaine and buttercrunch lettuce, and basil.
Posted by Kitty at 11:04 PM No comments: 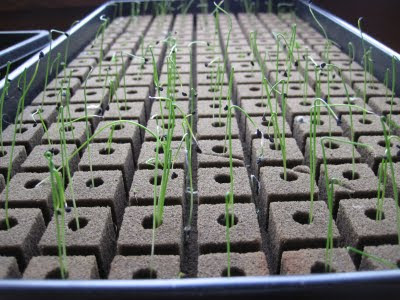 Hopelessly behind in updates, but not doing so bad in the garden for someone who is employed full time and is really good at signing up for extra-curricular options.

I was inspired to buy leek and celery seeds and an interesting cuboid sort of seed starter tray about 1.5 months ago. The choice of seeds because both seem to be rather slow growing and the new fangled seed tray because my friend who runs the nursery recommended it. The cubes resemble dark, dense foam of some sort or the other. Not sure of the brand as they came unwrapped as rather fragile sheets.

Typically, I'd order my leek seeds from Territorial in Oregon, but I was wanting instant gratification so purchased the only variety seed available at the local hardware store: Large American Flag Leeks and Utah 52-70 Improved from Ed Hume's seeds (a NW company that is appropriate for our area and reputable, but not the route I typically go).

The leeks are now about 3.5 inches tall and have been transplanted into larger containers in the greenhouse. The cubes were easily separated and the plants young enough that the roots were just showing through the bottom of the cube. About half of the plants are in a greenhouse/container version of a hot bed with a thick layer of relatively fresh manure below the layer of potting soil.
The celery are still in the house and are quite tiny, but do have true leaves.
Posted by Kitty at 10:10 AM 1 comment: 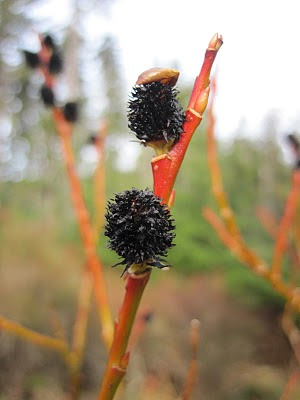 Salix gracilistyla ' Melanostachys' or Black pussywillow is another nice shrub for late winter and early spring that does well in Sitka. The stems, especially the upper (younger) portions, have a warm orange red color that makes a nice backdrop for the black catkins. The stamens are orange-red as well, so the catkins in bloom are rather striking.
The two shrubs in the garden started as cuts stems purchased at the Seattle Garden Show about 14 years ago. I carried them home in a suitcase, plunked them in water and like most, but not all members of the willow family, roots started forming pretty quickly. One plant started out in what turned out to be too tight a spot and I had to move it when it was about 4 ft tall and 5ft wide. This turned out to be unfortunate, as the pre-move shrub produced many catkins and had a pretty nice form. It hasn't quite recovered from the move yet, this willow is not as forgiving as the rhododendrons which seem to be really tolerant of moving around the garden.
Posted by Kitty at 12:04 AM No comments: 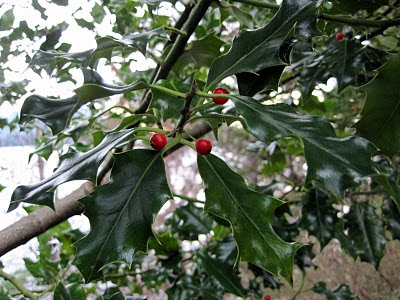 I bought two holly (Ilex ) bushes about 19 years ago from Spenards Building Supply. Not a specialty nursery by any means, but a store that on and off has had great garden center managers. They have also had some pretty uninspired ones.
I'm pretty certain that the plants are Blue Girl and Blue Boy (Ilex x meserveae) a very hardy hybrid. The Blue boys and girls are hybrids of English holy (I. aquilfolium) and Ilex rugosa. Blue Boy is of course male flowered and Blue Girl, female flowered. These hollies like many of the oldest shrubs in my garden have moved a time or two. These have not been given the best or sunniest spot, they are slow growing and I was dubious about every seeing a berry. Their current home is on the east side of the house near the very small artificial pond. They get a reasonable amount of light, but little straight sun. The site has good drainage and acid soil, both conditions that this plant enjoys. There is shelter from the southeast wind.

Most years I've given the hollies the same fertilizer that I feed to the rhododendrons. I haven't been able to bring myself to prune the shrubs despite their need of a bit of shaping. I've limiting pruning to what little I cut for Christmas. The growth rate is slow, so slow that cutting much off seems ill advised or more precisely painful for this gardener.
This isn't the first year, Blue Girl has had berries, but she does have more than ever before. Now, there are a few hollies in town that are doing better, but I'm comforting myself with the idea that they are older plants and that the Blue couple in my garden will be more fruitful as they mature.
Posted by Kitty at 7:08 PM 2 comments: